Site content may not be used for any purpose without explicit permission.

A lot of things happened over the course of two days this past weekend, but one thing stands out as the most important to me.  I met Jon Wye, maker of graphic leather belts, shirts, wallets, guitar straps, and other accessories. He and his business partner Jeff Ball had their usual booth at the Crafty Bastards Arts and Crafts Fair located at Union Market in Washington, DC on September 28th & 29th. It was exciting to me because I hadn’t attended Crafty Bastards in years, but this year I decided to volunteer for both days, and I am glad that I did.

I was aware of some of the items he made, as my wife has purchased at least one thing from him at the fair every year for years.

I believe the first thing she purchased was an early belt buckle that he made 7 or 8 years ago: 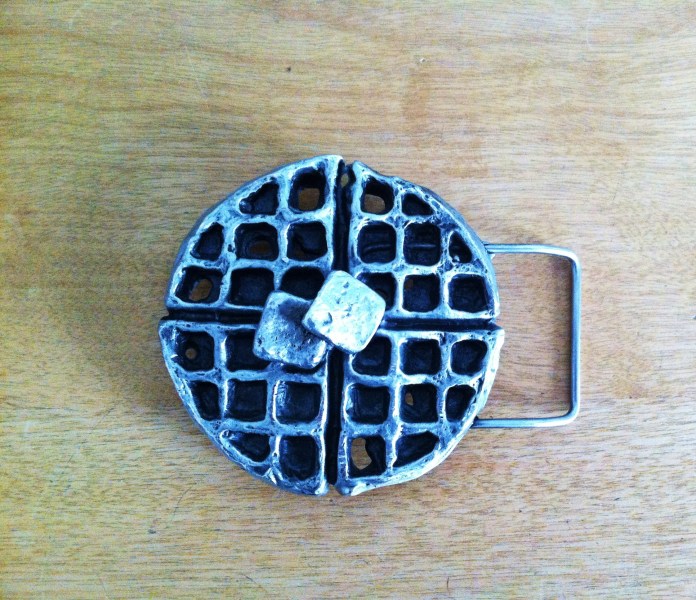 Year after year, different items began appearing at home and on her person:

When my wife and I first stopped at his booth on Saturday, I knew immediately that I had to leave with something. Had to. The first belt I was attracted to depicted two old west gunfighters having a showdown at sundown across the length of the belt. I asked Jon about that one, and he said that it was one of the first designs he came up with, just to see what a scene would look like on a belt. Then he showed me the belt he was wearing which depicted a more complex scene with space aliens and an overthrow of some distant planet. He had about ten belts displayed with these scenes and I finally settled on one that takes place on the sea. It was the Mermen that got me. Not just Mermaids, but Mermaids AND Mermen. I never saw a belt like it before. It was like seeing someone with a tattoo for the first time when you’re a little kid.

Though I was volunteering for this event for two days, and I spent the first day entirely behind a table selling one dollar waters and sodas, except for the quick trip to Jon’s booth, I decided to go on strike on Sunday, and spend more time looking at what all the vendors had to offer. One of the first places I went was back to Jon Wye’s booth to get another belt.

It was at this point that I started taking a closer look at his t-shirts. I noticed that he had one displayed that I have been wearing for a year now. My wife purchased one for her nephew at last year’s Crafty Bastards, but it was the wrong size so I inherited it. I told Jon that sometimes I did laundry just so I could wear that shirt again. It is one of the most comfortable t-shirts I own, plus it has a bear on it fishing for trout. I had to make some tough choices, and was able to narrow it down to two. I included the shirt from last year in this picture as well.

My wife decided she needed another belt as well:

On my many rounds through the fair I noticed that Jon’s booth always had a steady flow of people. The designs are eye catching, his uses great materials, and he and his team obviously enjoy what they do.

“We make almost everything by hand in our workshop in Washington, DC, and we try our hardest to get all of our materials and supplies from the USA. We make awesome!” 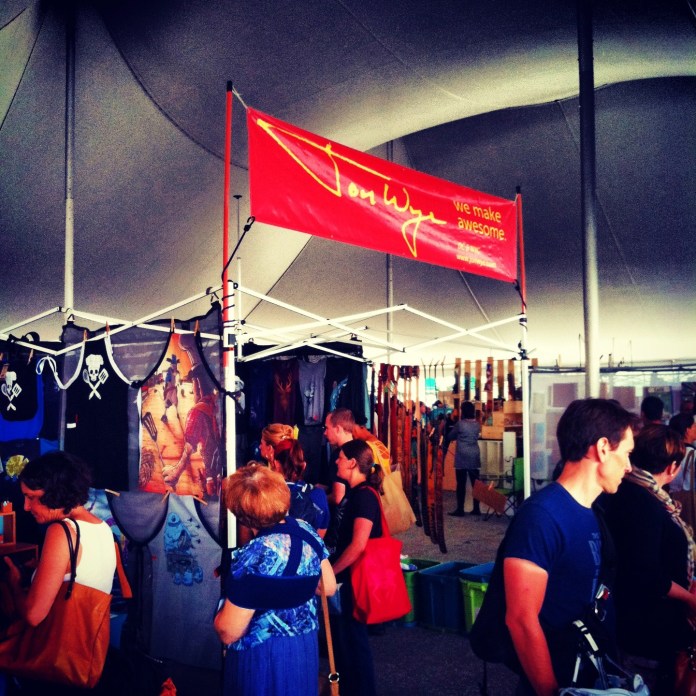 From what I can tell, the Thai Room that used to be on Connecticut Avenue in NW DC up there where Nebraska Avenue crosses, closed up shop in 2005 after a 30 year run.  I think there’s some kind of ping pong pizza restaurant with an even better known locally famous sign there these days that lets free form jazz pick up combos make experimental noises in the back.

I moved to the Washington, DC area in 1991, first to Arlington, then finally helping to start up a group house in Mt. Pleasant in 1993 with some other musicians that only liked to play in odd time signatures. The Thai Room was just always there. I know I went there on at least one date, maybe two, and I can’t remember if there were many other Thai restaurants around at the time. Couldn’t tell you if the food was good or not. Not sure if my palate was advanced enough at the time, probably isn’t that advanced even now.

But I do remember liking two things:

– All the green plants they had in the windows

I am not sure where the plants ended up, and if they are still living healthy plant lives or not.

I hope they are.

It’s in my friend’s backyard. 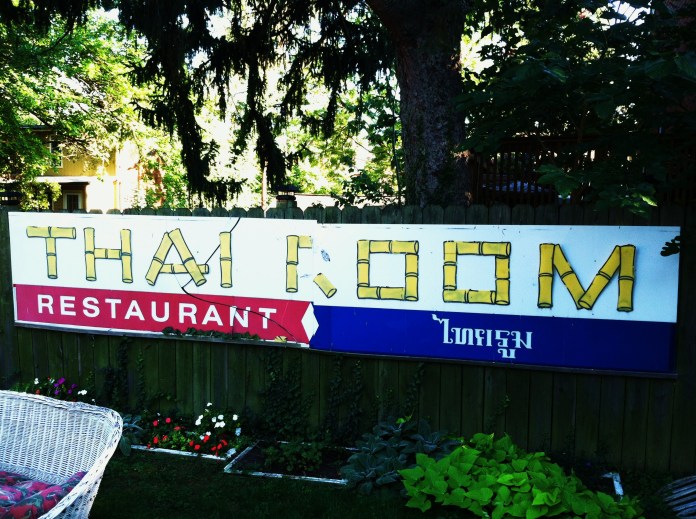 The new Thai Room is now located in the old Walter Reed area of Washington, DC and serves a seasonal prix fixe menu. Last time I was there I was offered deliciously smoked pork ribs, a green bean salad brought by another guest, and teeny tiny roasted potatoes. They have a strict BYOB policy, so I accompanied my meal with a 24 pack of Modelo Especial. Usually there is bourbon readily available, but the chef had finished it off two nights before, and finished all the Hornitos Tequila before I had arrived. Since the actual Thai Room Restaurant portion of the new site is only located outside, within the confines of a worn down fence that at times may catch fire from randomly placed candles, they have a smoking “at-will” policy, which is pretty nice (I almost wrote “sweet” here, but everyone knows I don’t actually talk that way). The new owners smoke more cigarettes than are usually available, and you may at a moment’s notice be sent out on a “ciggy run” to one of the many nearby liquor stores to make a transaction through bullet proof glass. One of the last times I visited this establishment, I was smoking on the upper deck waiting for an order of fish tacos with smoked jalapeno peppers, when I and all of the other guests were pelted by unripened pears tossed over the fence by neighborhood youths who immediately fled when I stood on my rocking chair and pointed directly at them with a look that said “you little mongrel pricks”.  Other nights I had enjoyed smoked chicken without incident. And I vaguely remember a special holiday dinner for St. Patrick’s one year that featured corned beef hash nicely done and accompanied with Jameson’s and those big bottles of Guinness Extra Stout.

Other pluses that make this joint favorable to me are:

– The utilization of grown on the premises vegetables (tomatoes, lettuces, peppers, cucumbers)

– The puppy who doesn’t bark and smells good.  Really good. The puppy in fact provided the after dinner entertainment the other night by leaping back and forth into the sprinkler.

The biggest plus for me is that if there is a queue for the single occupancy water closet sandwiched between two bedrooms , it is encouraged by the management that you piss in the garden.

A photo blog about Greenbelt, Maryland in its 75th anniversary year

The World and Writing of Eileen Maksym

A Journal in Pictures and Words

The Seminary of Praying Mantis Publishing

neurodivergence, feminism, and poetry: a jewel box, not without its thorns

"I will walk a thousand leagues in falsehood, that one step of the journey may be true." - Junayd

the photoshooter's journey from taking to making

Welcome to the world of cats!

notes from the living library